·        Events: The General meeting held on Saturday, March 5 at Las Positas, Livermore was a great success.  There were 51 members present for brunch.  Guest speaker Chris Thompson, Phd was well received. He spoke about how to engage our brains while playing golf and provided some challenging games to play.  Vendor and logo wear was a success.

Ideas were presented regarding the theme for this year’s Annual tournament October 16th.

The “Pay it Forward”program that raises funds through donations for club logo wear has started.  Della Gutierrez will be handling the program.

·        Membership/Communications: Total is at 145 as of February 29.  New member mixed discussed and planned for May.  FWGA is working on placing an ad in the Sentinel advertising the club.

Information on the web site and publications are being updated. Historical information about the club will be archived on the web page for the future.

·        EGGS: The Kickoff brunch on February 21st, hosted by Betty McCabe and Sally Panella was a huge success with 20 members present.  The clinics were announced and additional play days were scheduled.

·        Tournaments:  Updates were provided.  Eagle Vines on April 2 has 38 registered with only a couple of slots left available.  FWGA invitational tournament is April 30 and May 1 at Saddle Creek and Sequoia Woods – it is currently still open for registrations.

·         Casual Play:  Twilight will be starting on April 6th at Redwood Canyon.  Everything is going well but the 18-hole weekend is still looking for volunteers to run play days, contact Terri Malatesta.

·         Handicaps and Clinics:  All the clinics are scheduled and posted on the FWGA website.

A volunteer is needed to run the Club and Players championships for the 2016 season. 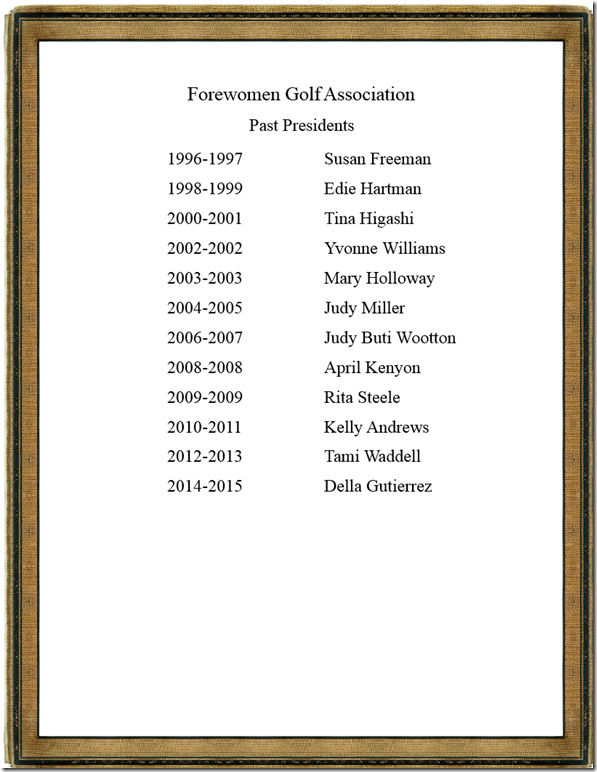 The results of the 2016 Board elections were announced in November.   With over half of the board leaving, some of the board and some past board members have volunteered to serve for one more year.  It  is through our members who volunteer their time that FWGA is able continue our casual play, tournaments, charity support and fun social events.   We would like to thank our out-going board members  Della,  Duayna, Wendy, Leta, and Judith, and April for their hard work and support these past two years.