This is a course that rewards the “thinking golfer…length and power are not the most critical skills required to play the course well.”

There is a variety of terrain throughout the course – front nine is routed through the valley and the back nine sits on a higher elevation with the Happy Valley Creek winding throughout. Views of Mt. Diablo fill the sky to the north and sanctuaries dedicated to the Callippe Silverspot Butterflly are displayed on holes 11 thru 14. In case you were not aware, this butterfly is medium sized with a wingspan of 4 to 5 cm and is found in native grasslands where females lay their eggs on the flowering host plant – Johny Jump-Up. It is a Federally Endangered butterfly. What a treat it would be to spot one while playing these holes!

Come play the unforgettable par 5 18th hole, Callippe Preserve’s most strategic and dramatic closing holes in the Bay Area. Come experience why for yourself!

*FWGA Invitationals / Out-of-town tournaments – you are invited to ask friends, spouses or partners to come and play in these events.

Imagine playing golf in a national park. In the midst of Monterey pines and the Del Monte Forest, it is a fantastic setting. The course played tough, the greens were lightning fast and the temperature was an amazing 90 degrees. Who knew it could get that hot in Monterey! We had 14 players and the format was blind teams with the lowest combined net score.

Low Gross was Kristina Ramos with an 88. Low net to Liz Riddle 74

Congratulations to all the winners, tournament coordinator, Liz Riddle,  and a big thank you to all that participated! It was a great day playing at this fantastic NCGA course.

The first of FWGA’s Invitational Tournaments was at DeLaveaga located in the beautiful hills of Santa Cruz. We must not be distracted by its beauty, though, as it was demanding of skill. However, each challenging hole (that is every hole) that DeLaveaga laid before us was seized by our confident FWGA players.

The game format was Odd and Even Match that had two person teams. Although everyone plays all eighteen holes, one player of each team scores gross on even holes while the other player scores gross on the odd holes. One-half of the combined course handicaps of each team is used to determine the net score of each twosome – lowest net team score wins. 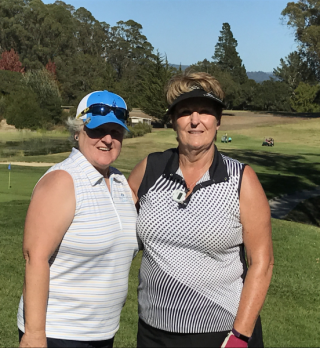 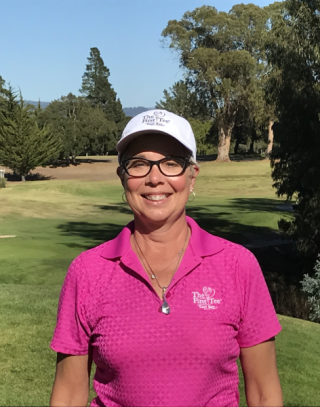 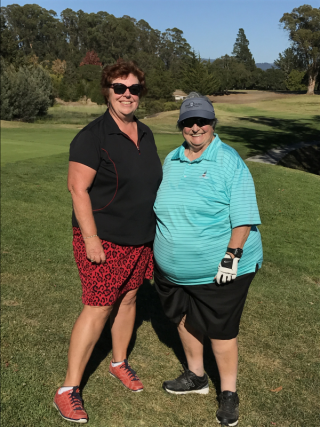 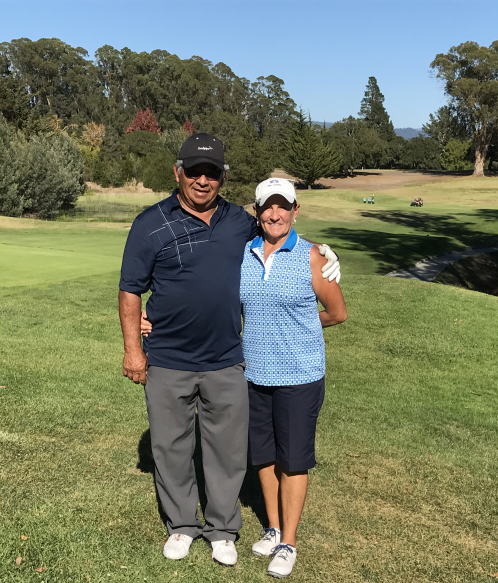 Another fun day of golf with FWGA, thanks to tournament chair, Alleen Hodgkin.

The morning dawned cool and foggy.  Twenty-three FWGA golfers and 4 First Tee of the East Bay young ladies signed in, warmed up at the driving range before heading off to play 18 holes of golf close to 8:30 am on the Tony Lema course.  The selected format was four person, two best ball.  The 9 hole Marina Course tournament  started at 11:30 am with 16 players, four of which were young ladies from First Tee of East Bay.

The starter warned us of the foxes on the 18 hole course who would take any opportunity to grab food from the unsuspecting player left out in the cart.  Sure enough, they were ready and waiting for us at several holes.  Although the wind off the estuary was fairly calm in the morning, it picked up by noon.  As a result, the back nine became more challenging than it already was!  The ladies on the 9 hole Marina course said they had smooth sailing during their round...

After the rounds, both the 9 hole and the 18 hole players crowded into the snack bar area awaiting the results.  Special thanks go to Liz Riddle and Terri Martell, our official scorers, who had double duty, calculating the scores for both tournaments. Yikes!

For the 18 hole tournament on the Tony Lema course: Winners for the  9 hole tournament on the Marina course: 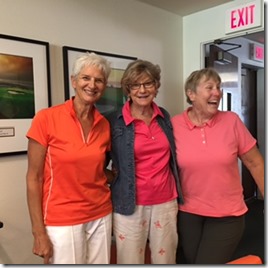 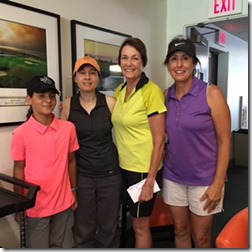 Liz Riddle coordinated this year's 9 hole/18 hole Combo score winners.  Blind draws made up the teams from the 9 hole/18 hole players to form another group of winners.  Thanks Liz, we know that wasn’t easy but lots of fun.  Great way  to meet new people. 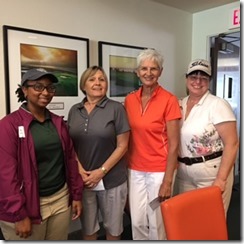 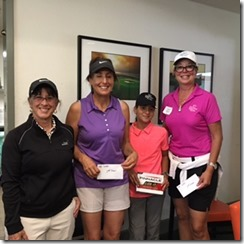 18 Hole Results -The 18 hole tournament’s two closest to the pin holes were #4 and #10. Flight A players had to reach the green in one stroke. Flight B players were allowed two strokes to reach the green. Hole # 4 - no Flight A winners.  Flight B – Linda Dobb chipped in just inches from the hole!   Hole #10 – Flight A winner was Alleen Hodgkin at 9’2”;  Flight B was Cheryl Ramirez at 9”.  Great 2nd shot, Cheryl!

Thanks to all of our volunteers, Cheryl Ramirez, tournament photographer,  Liz Riddle and Terri Martell.

After all was said and done, it was a great day of golf!

Looking forward to next month's upcoming away tournaments!

Some claimed they could hear bagpipers on the 18th tee but that was just the wind whistling through sunny skies. Especially enjoying the "Lone Ranger" game format were Pat White, Lalani Rapp, and Marilyn Bestion, who won with a score of 145. 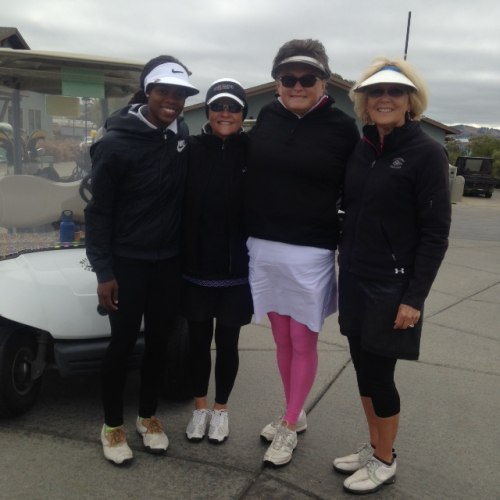 Second place went to Della Gutierrez, Carol Papke, Tami Waddell, and our guest, Stanford basketball player, Lilli Thompson, who had a score of 151.

Closest to the pin prizes went to April Kenyon (holes 7 & 15) and Marilyn Bestion (hole 12).  Chip-ins were Della Gutierrez (who also had a birdie) and Therese Johnson.  Low gross was April Kenyon at 88 and low net was Liz Riddle at 71!

Chip-ins were Theresa  and Della.

Thanks to our tournament director, Linda Dobbs for a great day!

Our last home tournament of the season will be on August 20 at Monarch.  Why not sign up and join the fun--the prizes are great, and the camaraderie among our golfers will bring joy to your heart and your game. 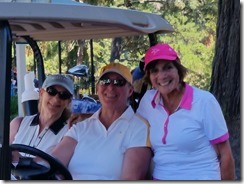 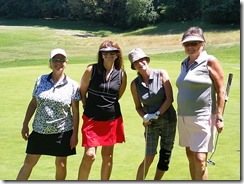 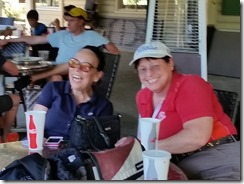 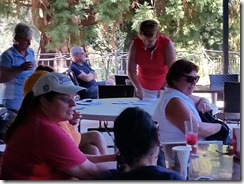 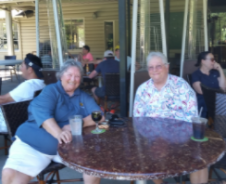 Twenty ladies came out to have a fun tournament at Tilden Park on Sunday, June 26, in spite of the heat.  The format was Cha, Cha, Cha. 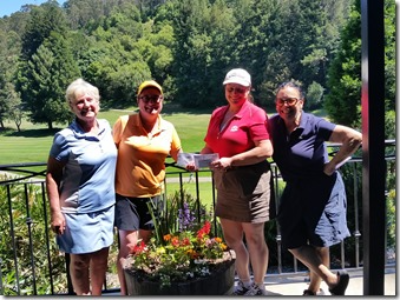 Closest to the Pin went to Alleen Hodgkin (Flight A) and Therese Johnson (Flight B). Dee Tuohy was the only one with a Chip in and there were no reported birdies.

Low Gross was Liz Riddle who shot a 95; Low Net went to Linda Dobb who shot a 79.

Way to go ladies. . . .Thanks to Tournament Directors Terri Malatesta and Julie Campiotti for a great day!

What a great day we had at San Geronimo on the 11th.  The weather was as beautiful as the course, but there were a few of us that wish we could have said that about our game!  It was fun course but there are a number of challenging holes that were definitely target golf. 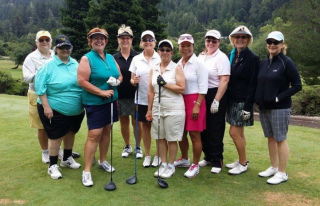 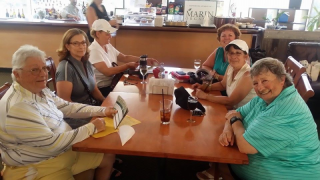 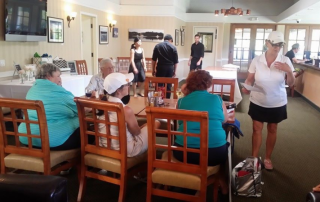 The format was “Three Blind Mice”. Everyone played their own game and  th e team score was added up.  After the round, we asked the pro of the course to pick three holes they disliked the most.  We discarded those holes and them added up the team scores. 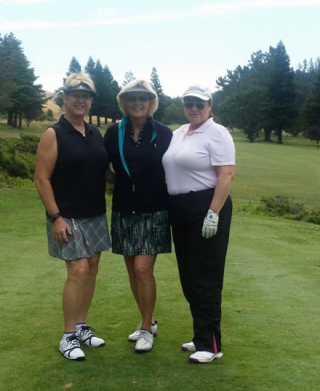 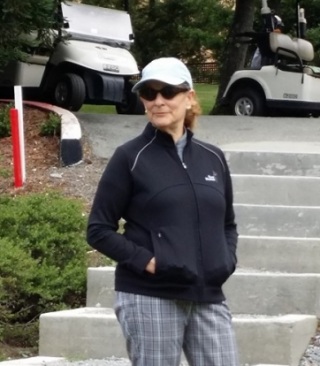 On the birdie board with one, each was Mindy Canner, Therese Johnson, and Della Gutierrez.  Low net was Therese Johnson with a 71 and Gross was Liz Riddle with a 94.

Everyone had a great time and we want to especially thank Della for setting up a fun tournament.

Join us for our next tournament at the majestic Tilden Park on 6/26/16.  See you there.

The first 9-Hole FWGA tournament of the year was held on Saturday, June 4 at Redwood Canyon Golf Course in Castro Valley. The course was in great condition and the 21 golfers were lucky to have a beautiful, albeit rather humid day to play their round of golf.

The format of play was Cha-Cha-Cha, and while some of the participants were new to tournament golf, everyone seemed to enjoy the game. The format consisted of the lowest net score of each team on the first hole, the two lowest net scores on the second hole, and the three lowest scores on the third hole. This was repeated for the final 6 holes. All threesomes for the day were blindly assigned a fourth team member, but only the Tournament Director, Judith Coleman-Cohen, and our Board Director of Tournaments, Alleen Hodgkin knew the Blind Draws. All Blind Draws were factored into the team net scoring at the end of the round.

The First Place Team was Caryl Diller, Louise Kennedy and Alice Hansen, with a team score of 68 (factored with their Blind Draw player, Liz Riddle).

The Second Place Team was Cindy Barni, Anne Cain, and Carolyn Gellner, with a team score of 72 (factored with a Blind Draw player, Jill Martin-Smith).

The Third Place Team was Judith Coleman-Cohen, Jill Martin-Smith, Kathi Kling, and Shirley Walker, with a team score of 73.

Liz Riddle won all three closest to the pin contests, on holes #3, #5 and #7. Liz also got the Lowest Gross Score, a 45. Next year Liz will be required to compete Left Handed! (Kidding!!)

Lowest Net Score, 34, was achieved by Sally Andrew, a guest of Janis Salvi.

FWGA 20th Anniversary Raffle winners were Susan Gallinger, who won 2 tickets to the US Women’s Open, and Janis Salvi , who won a water bottle.

Judith would like to personally thank the following people for helping make this tournament a huge success: A thanks goes out to Alleen Hodgkin for providing the scoring sheets and figuring out the course handicaps… a huge time saver for my math-challenged brain. Big thanks go to Cindy Barni, Anne Cain and Shirley Walker who arrived earlier than necessary to set up the registration table and run registration.  Other big thanks go to Jill Martin-Smith and Kathi Kling, who helped with totaling the scores and factoring in the Blind Draws. (All complaints should be submitted to these individuals…!). Without help to run these tournaments, it would be an impossible job.   But, the bigger story is that it is a fun and educational process, and one which helps justify the consumption of any adult beverages at the end of the day!

All in all, this tournament was a lot of fun and a big success.  Thanks Judith!

FWGA’s May tournament was held on Sunday, May 22, at Blue Rock Golf Course in Vallejo.  Twenty-four enthusiastic players making up six teams turned out on a breezy cool day of fun on the East Course.  The format of play was Cha-Cha-Cha ~ a new game for some of the players… so after a bit of last minute touch-ups to the scorecards, play started on time and the pace of play was great.  The format consisted of the lowest net score of each team on the first hole, the two lowest net scores on the second hole, and the three lowest scores on the third hole. On the fourth hole it was back to the one lowest score and so forth throughout the round. The lowest team score was the winner. 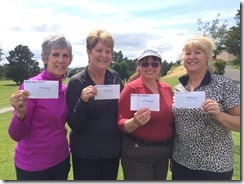 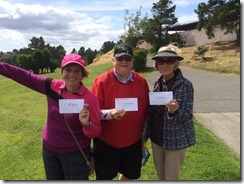 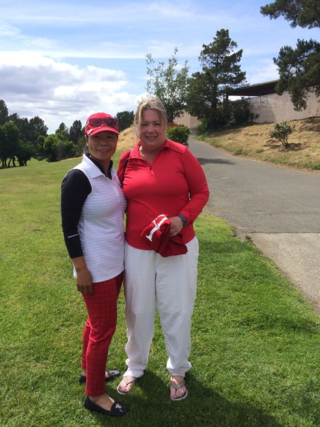 Longest drive on the third hole went to April Kenyon. Lowest gross score was April Kenyon with a 90; lowest net score was Wendy Chu Ngoy with a 73. Linda Dobb won a chip-in, and we grossed $39.00 in the chip-in jar for charity.

After a great day on the links, Joan McCarthy announced the winners in the cafe before our drive home.  Special thanks to all the volunteers who made it a wonderful day at the course: Joan McCarthy and Loraine Ward Theroux, Tournament Hosts; Alleen Hodgkin, Tournament Director; Liz Riddle and Pat White handled scoring; Alleen Hodgkin and Mindi Canner on registration, and Betty McCabe served as photographer.